SpatialAnalyzer® (SA) adoption has increased due to the need for added precision, common hardware interface and flexible applications – but there’s even more it can do. Todd Burch of NRK talks about one of the growing uses for SA: Measurement Planning. Measurement Planning is a module within SA used to script out commands in a series like a programming language.

SpatialAnalyzer® (SA) adoption has increased due to the need for added precision, common hardware interface and flexible applications – but there’s even more it can do. Todd Burch of NRK talks about one of the growing uses for SA: Measurement Planning. Measurement Planning is a module within SA used to script out commands in a series like a programming language. 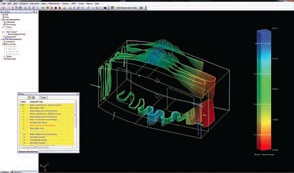 Measurement and analysis is automated with a series of 500 commands. “This enables complicated or repetitive analysis to run‘under the hood’ without users doing it manually. This helps avoid errors, like keying in the wrong number accidentally,” Burch said. Standardizing a process with Measurement Planning has other benefits that save time, including faster analysis. The script doesn’t just run, it also includes arguments and inputs to control execution – you can even communicate with the user through a window if needed.

So how do you do it?

If you have a good working knowledge of the process you need to automate, then SA is the software to do it. Burch explains: “Let’s say you had 100 groups with 100 points each, and you wanted to fit a circle to each group. You would write a measurement plan to execute a circle fit 100 times. Write it once in a measurement plan – and instead of doing it manually over and over for an hour, you can do it in a couple of seconds,” he said.

Multiply by several times per year, and it saves time and money. Once you’ve decided that your process can be accelerated by a measurement plan, there are built-in ways to debug in SA. Burch said, “There are a number of tools to aid with testing. To avoid errors in automating, you can run through a test loop several times. There’s the option to step through it one line at a time and a feature called “MP Watcher” which allows you to see what’s happening under the hood as the script is running.”

Measurement planning doesn’t fit with every process, of course, but it’s remarkable how many it does assist with. For example, compare a process that might take 2 people 5 to 7 days to complete, with the two weeks to write a measurement plan for the same process. It’s about the same amount of manhours until you calculate this in: 2 minutes to execute every time after. It’s easier, faster, and more reliable – desirable on all counts.

Burch is enthusiastic about measurement planning from his own personal experience. He worked at a shipyard and saw how doing the same task in several ways could open up room for error.

Measurement planning makes a compelling case for saving time and money and avoiding errors. So, why isn’t everyone using it now? “I think it’s a lack of education on what it is…without a programming background, I can see how it might be intimidating,” Burch said. But, one of the advantages of MP in SA is that you don’t necessarily need to know about programming – it has a graphical interface.

Burch said that it’s not too hard for even an entry level user to benefit from using it. “Explore it – I think most people will find it’s easier than they thought,” he said. Ease plus efficiency: that’s a valuable equation.